The world celebrated International Day of Older Persons on 1st of October. Sri Lanka also celebrates its Children’s Day on the same day.

What a beautiful coincidence, even though perhaps purely by chance (and not by design). Indeed, this celebration of the young and old age alike is a symbolic representation of the lifecycle approach and intergenerational engagement that is crucial for addressing some of the challenges of population ageing or longevity.

While e-launching “The social policies catalogue on population ageing: A rapid scoping review” developed by United Nations Population Fund (UNFPA) the Asia Pacific, its Director, Bjorn Andersson, reiterated that the solutions to the challenges faced by the ageing populations in the region must be grounded in a life-cycle and inter-generational approach, with gender equality and social inclusion at its core, and optimal sexual and reproductive health and reproductive rights for women and girls as its key components.

Andersson said that there is no country in the Asia Pacific region that has a single policy addressing all aspects of the dynamic population transition. Many policies on population ageing do not include intergenerational engagement, while others lack social inclusion components to enable full and meaningful participation of older persons in society.

strengthening of health systems to promote healthy lifestyles throughout the life course to reduce risks of NCDs and ensure equal access to sexual and reproductive health and rights SRHR;

strengthening social policies, including social protection, so that all individuals can attain an education and decent work and have access to social safety nets like childcare and pension schemes; and

eliminating all forms of discrimination against older persons through the promotion of social inclusion, including intergenerational solidarity and age-friendly environments to transform society positively towards ageing.

Decadent gender roles are the biggest bane for older women

Illiteracy and society’s clinging to decadent gender-specific roles is the biggest bane of the elderly women, especially in countries of South and South-East Asia. Despite the reality that COVID-19 pandemic has exposed the “fiction that unpaid care work doesn’t work” (said Antonio Guterres, UN Secretary-General), women even if educated, are expected to be engaged in unpaid work as carers of the family. In patriarchal societies, like India, there is hardly any help coming from the male members of the family, even in the so-called modern households. So their participation in the workforce takes a backseat and they are economically dependent on the menfolk. So they have no money of their own and hence no personal security net or social protection in their old age. Moreover, as biologically women tend to live longer than men, this longevity simply abets their financial as well as health problems.

Professor Tengku Aizan Hamid of Malaysian Research Institute on Ageing (MyAgeing) and Director of the Institute of Gerontology, Universiti Putra Malaysia, said that as childcare is very expensive in Malaysia, even educated women find it more economical to stay out of the workforce rather than put their children in daycare. According to her, there is a need to look at social protection aspects in terms of lifecycle perspective of providing for women, and stereotype gender roles should not override or determine their workforce participation.

While speaking at an online session of 10th Asia Pacific Conference on Reproductive and Sexual Health and Rights (APCRSHR10), Krishna Murari Gautam, Chairperson of Ageing Nepal (Ageing Nepal was awarded the coveted UNESCO King Sejong Literacy Prize last month), made a fervent plea for the lifecycle approach to address and incorporate health, education, and training.

All these three components (of health, education and training) are an integral part of every stage of human life. Maintaining a healthy lifestyle throughout the lifecycle, starting from childhood is essential for healthy ageing and for keeping many illnesses at bay. Education stands everyone in good stead – not only in terms of making one more employment worthy but also for expanding the ability to think rationally and act without prejudice. Training and updating oneself with the latest technology will not only reduce the generation gap 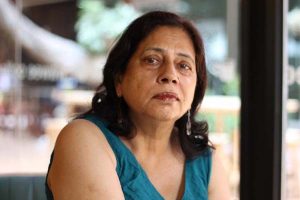 Shobha Shukla is the founding Managing Editor of CNS (Citizen News Service) and is a feminist, health and development justice advocate. She is a former senior Physics faculty of Loreto Convent College and current Coordinator of Asia Pacific Media Network to end TB & tobacco and prevent NCDs (APCAT Media)

but also help in social inclusion and improve the coping mechanisms of the senior citizens. And yes, let us also give a thought to celebrating Children’s Day and the Day of the Older Persons together in a participatory manner.

1st of October 2020 was also the start of the “Decade of Healthy Ageing”, a World Health Organization (WHO) supported UN initiative to “bring together governments, civil society, international agencies, professionals, academia, the media, and the private sector for ten years of concerted, catalytic and collaborative action to improve the lives of older people, their families, and the communities in which they live.”

(Shobha Shukla is the founding Managing Editor of CNS (Citizen News Service) and is a feminist, health and development justice advocate. She is a former senior Physics faculty of Loreto Convent College and current Coordinator of Asia Pacific Media Network to end TB & tobacco and prevent NCDs (APCAT Media).