The filth is growing day by day and the desperation on the faces when the entire cabinet and a rabble-rousing chief minister from neighbouring state is campaigning. The focus is on Pakistan and ‘terrorism’ and not the basic amenities of the people. It is deeply shocking the way BJP leadership has turned the Delhi elections into an India Pakistan battle. BJP will have to introspect in longer run whether it want to remain a political party or a rabble-rousing militia pushing one Indian against the other. Why is the party not responding to the issues of the people of Delhi? Why is it important for the party to term every opposition leader as anti-national? Does it have any leader who participated in the freedom movement? It does not have anybody yet it wants to hijack the legacy of the freedom movement where all Indians irrespective of their caste and religious identity joined hand to compel the British out of this country.

Delhi’s elections have become important now. I never thought that a small state like Delhi will be so important for the leadership that they are ready to vitiate the atmosphere of the Delhi which has never been that bad since 1984 when the Congress goons along with the Sanghi mindset and goons unleashed violence on innocent Sikhs and carried out the pogrom of them in Delhi. We never saw that hatred since then.

Why is this environment of hatred being created here? The Ministers are the custodian of our constitution and they need to protect it but instead they are violating and speaking in the most vulgar language. The pathetic helplessness of Election Commission does not bode well for our healthy democracy. The Election Commission should not only bar these Ministers or leaders permanently from the election campaign but should file FIR with an intent that any future repetition might force the Commission to even request the loss of their membership from Parliament or Assemblies.

A peaceful protest in Shaheen Bagh and many other places have now been vilified by the BJP. Why is that happening. Why you bothering about it. Do people have no right to protest. Does anybody in the government care why these women, with children, a large number of those, with infants too, are sitting from last fifty days. Why is this happening that women who rarely venture out in night or daily, out of their home, are here, shouting slogans for justice. And the answer is clear that never in post independent India, the Muslims have felt that much insecure and threatened as they are feeling today and the government and the BJP in particular seem to enjoy this insecurity. Now, BJP might feel and understand that the fear of the people has gone and they are ready to fight till get justice. When all avenues of peaceful protests are shut, people will do at the places nearby their homes.

I want to salute these bold women who have taught all of us so many things including their faith in democracy and India’s secular ethos. Two youngsters who are openly Hindutva inspired and caught up firing at Jamia and Shaheen Bagh in the last two days were spared by people.

In any Sanghi meeting, such youngsters of the opposite side would have been lynched or police would have done so but the best side of this is the complete show of non-violent protest of Shaheen Bagh women is a shining example. It will be the among the most outstanding form of protests, if ever we write the history of protest movements in India. It has given voice, ideas and provided hope to all of us.

Today, Shaheen Bagh complete 50 days of this historical protest and we see the Hindutva propaganda machinery in full swing terming it anti national and asking the people of Delhi to mobilise against it. Attempt are being made to intimidate people and polarise the Delhi voters.

We have seen how the present leadership of the BJP came to from all the protests in the name of Ram Mandir. Disruptions of normal life, damage to public property, stones at police as well as Muslim localities were ‘normal’ characteristics of Hindutva protests apart from chanting of deliberate provocative slogans but none of them ever got a notice for damaging public property. The same leaders today speak up language that we should not protests as it creates ‘disturbance’ to the common people. Well, in 1990, we had a prime minister who our Savarna media forget and his name was V P Singh. He had the courage to speak up things and act. He fulfilled his promise to give the OBCs their due in jobs by accepting the recommendations of Mandal Commission. Which sought 27% reservation for them. BJP started its Ram Mandir movement afterwards and Advani’s infamous Somnath Ayodhya yatra began which left a trail of blood of innocents in every place it travelled. Finally, the yatra had to be stopped at Samastipur, in Bihar on October 23rd, 1990 as the Prime Minister ordered Bihar Chief minister Lalu Yadav to not allow the yatra beyond Bihar as it was bound to disturb peace in the state of Uttar Pradesh.

The Hindu media and the Brahmanical reporters abused V P Singh despite the fact that he was protecting the Constitution of India. When the savarna children were forced to commit suicide by the C grade journalism of Arun Shourie, that Arnab now follow on TV, V P Singh spoke about the pain and talk to them. He spoke about the dangers of the theocratic state and how BJP want to create it before his resignation. That time, many felt that he was wrong but if anyone want to know the politics of BJP, they should read those lectures and talks of V P Singh but he was the ‘worst’ human being for this manuwadi media. That is how they build narrative and distort history.

Narendra Modi has not spoken a word about Rohit Vemula’s death, about student protests, about CAA, about so many things that haunted us in the last five years. Instead, his juniors as well as seniors were building conspiracy ‘theories’ to discredit all these movements and yet our media did not have the capacity to ask question to him. The man who hate to speak to media yet media love him so much. 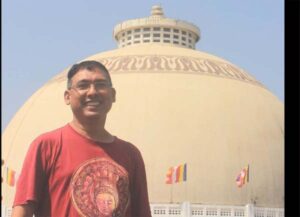 It is time for prime minister Narendra Modi to speak up to the young boys picking up guns. Invoking Gandhi’s name for cleanliness may be good but please do speak to your cadres to come out of hatred. Hate will take India nowhere. Let us be very clear, India’s image has already damaged in the world and if we are trying to evade these questions through ‘artificial intelligence’ then we will be disappointed as the world has started reacting. BJP leaders should focus on governance and not threaten people for their differing views. Pushing people against people will not resolve any issues. Now, our youth understand what is needed for a stronger India. It is the strength of us all, its diverse cultural value system, its Hindus, Muslims, Sikhs, Christians, Buddhists, Adivasis, Dalits, non-believers, atheists, humanists. India has chronic poverty; we still have huge gender disparity. Caste violence against Dalits is the order of the day. Untouchability persists, Education system is in the mess. Land Reforms never happened. Forest Rights not being granted to Adivasis. Our hospitals don’t have enough infrastructure, doctors. Poor have an issue. Hunger remains in many pockets. Let us focus on these issues to make us stronger. We will only be stronger if we respect each other, live in complete harmony, enjoy our diversity and treat all citizen equal as our Constitution define. We can’t have different categories of citizens.

Let the Delhi Elections focus on people’s issues like education, health, housing, water, electricity and of course our living togetherness as citizen of India. Let Delhi remain the vibrant hub of multiculturalism that reflect mini India where everyone irrespective of their faith, language, region or identity can thrive and progress. We hope people of Delhi will vote on these lines and defeat the forces who don’t want to speak on the agenda of Delhi but on the agenda of Pakistan.