Professor Sudha Bharadwaj has been in jail since August 2018. She was taken into police custody on 26 August 2018 on suspicion of being involved in Maoist terror activities after Republic TV claimed that she had allegedly written a letter to Maoists and was conspiring to create public disorder and unrest in India. The channel felt no shame in broadcasting that the elderly Professor was planning to murder the Prime-Minister of India. The police arrested her subsequently and she has been kept in jail continuously since then.

Born in the United States to Indian parents she gave up her US citizenship, earned a degree in Mathematics from Indian Institute of Technology, Kanpur to become a dedicated civil rights activist and a trade union lawyer who diligently worked for the poor and marginalized. As a general secretary of People’s Union for Civil Liberties, Chhattisgarh, she often led protests against the unfair land acquisition policies of the state. In addition to this, she has campaigned to protect the lives and livelihoods of tribals including those from indigenous Adivasi communities, to secure them land and forest rights and exposing administrative corruption. She has been at the forefront in raising voice against the systematic state oppression and injustices against the downtrodden. She has also been a visiting professor at the National Law University, Delhi, and has impressed students with passionate lectures on law and poverty.

The arrest and subsequent harassment of Sudha Bharadwaj do not seem to be an isolated attack on an individual but appear to be a part of a planned agenda of the right-wing with vested interests to target various civil rights activists, pro-bono lawyers, and intellectuals who have vehemently criticized the anti-people policies the government. Also, the way these individuals are being maliciously branded as urban Naxals and anti-nationals on national television debates, especially in times of shrinking democratic spaces is extremely dangerous. Many who have interacted with Sudha Bharadwaj in both professional and personal capacities have been pained to witness this odious attempt to attack a people’s advocate and a venerable professor who has been a vehement supporter of the transformative values of the Indian constitution.

When she was visiting the home of one of the writers of this article in Lucknow along with a labourer colleagues from Chhattisgarh she was offered a cot in the night to sleep, she declined and slept on the floor like the worker as there was only one cot.

In the opinion of Professor Aparna Chandra and other leading professors of the National Law University Delhi, “Professor Sudha Bharadwaj is an embodiment of the best in the academic profession and a fearless critic of governmental lawlessness, an emphatic and empathetic advocate amplifying the voices of those who are rarely heard within the corridors of power, and a beacon for future generations of lawyers in this country. Through her advocacy, her teaching, and her life, Sudha Bharadwaj exemplifies the transformative role of a lawyer in a society like ours. We can only hope to be as brave, insightful, and conscientious as her in our work and our daily lives. Citizens like Sudha Bharadwaj are the reason that our democracy lives and thrives”.

It is worth noting that previously Sudha Bharadwaj had been invited to the National and State judicial academies for her positive contributions to labour and environment law, development, women’s rights, tribal-rights, and access to justice. She had also been nominated to the governing body of the Chhattisgarh State Legal Services Authority.

NLU Delhi students feel fortunate to have benefitted from her astounding academic excellence. Her students can testify her unwavering commitment to the transformative vision of the Indian Constitution and she has constantly emphasized the use of constitutional methods in addressing public grievances and not violence. One wonders, how can a professor who owes unwavering allegiance to the supreme law of this land and Gandhian non-violence can be accused of toppling the government using questionable means.

She has been falsely labelled as Maoist and Naxalite and booked under the draconian Unlawful Activities Prevention Act and other provisions of the Indian Penal Code, that include but is not limited to sedition (section 124 A), criminal conspiracy (section 120 B), unlawful association (section 153 A) and imputations and assertions prejudicial to national-integration (section 153 B). These sham accusations and trials just to keep these civil rights activists under incarceration flies in the face of several leading Supreme Court judgments wherein the apex court has held that arrest could not be made by police in a routine manner. 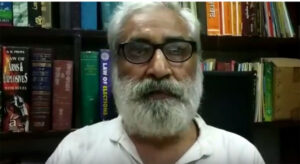 This is certainly not the characteristics of the Swaraj that Gandhi and other freedom fighters dreamt of. They did not against the colonial rule for an independent India, in which the harassment and arbitrary arrests of activists would become commonplace and where even basic civil liberties would be under threat. Whereas the father of the nation enjoined upon the Indian State to strive to bestow freedom and Swaraj to the poorest and weakest, the current dispensation seems to be doing the opposite. It seems determined in depriving them of their freedom and liberty by arbitrarily arresting and throwing them in dark and lonely dungeons.

The continued incarceration of Sudha Bharadwaj even during the Covid-19 pandemic is inhumane and unconscionable. She suffers from various ailments including two severe comorbidities, diabetes, and high blood pressure, and also has a history of pulmonary tuberculosis. This puts her in the category of most vulnerable people facing a high fatality rate if they are infected by the virus. An inmate of Mumbai’s Byculla jail where she is currently lodged has already tested positive for the virus. Despite this, the agencies opposed her interim bail plea by arguing that she is “taking undue benefit” of the pandemic. The state must either prove its charges against her conclusively or set her free.

By Atul and Sandeep Pandey

Atul is a 4th year LLB student at National Law University, Delhi and Sandeep Pandey is a visiting faculty there for this semester.